You will find this article about a new study just released interesting: “CAN WE HARNESS BACTERIA TO HELP CLEAN UP FUTURE OIL SPILLS?”

In many respects, this is old news, but why is it coming out now?

My analysis—studies continue to flow to reinforce the “not to be concerned” posture over irreducible minimum oil spill clean up, because folks, “Mother Nature knows how to take care of it herself.” Canada has just enacted their own regulations that reinforce this U.S. agency position giving free reign to toxic Corexit Dispersants for use on their offshore oil spills.

And, carefully study a key statement in this report:

“Observations in the Gulf appeared to confirm that microbes broke down a large fraction of the oil released from BP’s damaged well. Before the spill, waters in the Gulf of Mexico contained a highly diverse range of bacteria from several different phyla [groups], or large biological families. Immediately after the spill, these bacterial species became less diverse and one phylum increased substantially in numbers. This indicated that many bacteria were sensitive to high doses of oil, but a few types were able to persist.” 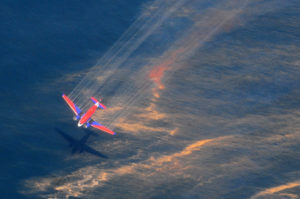 This is bad news—because this research while seeming to be good news, will likely be used to encourage use of chemical dispersants (as ‘Nature’s helper‘) and/or the development and use of modified organisms for cleaning up spills, eeek! (Adding foreign species into the environment=not good!) However, the critical aspects of why this study is raises concerns are not discussed.

Simple logic tells us that crude oil plus chemical dispersants disrupt a perfectly balanced ecosystem which includes a diverse population of bacteria (confirmed by this study).

The diversity of bacteria/plankton populations is pushed out of alignment when there is a large oil spill, and even worse when dispersants are added, which then triggers a chain of negative environmental events.

The line of logic in oil spill response needs to be simplified rather than obscured by pumping large quantities of smoke screened data into massive oil spill science data bases.

This is why LAEO stands by the simple solution of the Enzymatic Bioremediation (the EPA listed OSE II) formula as an example of wholly workable technology for cleaning up oil and other hazardous chemical spills. Three key reasons:

Can you get more basic than that?

LAEO’s research programs continue to work to inform scientists and government regulators that the the technology hoped for is here, already exists and has been cleaning up spills for 30 years — unfortunately that information is only just reaching the science community. We are hoping they will collaborate with us to better understand what is already working!