Above Politics—A Message to Humanity

Los Angeles/South Africa—The Lawrence Anthony Earth Organization (LAEO), an international conservation non-profit, has launched its worldwide Cooperative Ecology movement with an inspirational short: A Message to Humanity. The video, directed by award-winning cinematographer and producer Taron Lexton, captures the beauty of our planet through the use of original footage—while driving home humanity’s role as not only the source of the environmental problems we face but, also, the source of their resolution.

Named after its founder the late South African Conservationist known as the ‘Indiana Jones of Conservation’ and the ‘Elephant Whisperer,’ the Lawrence Anthony Earth Organization (LAEO) held a simultaneous online premiere release event as part of rolling out their new brand of environmental conservation: Cooperative Ecology™ (abbreviated, CoEco™).

Their Message to Humanity is certainly thought provoking—intended for one to walk away with a feeling of having some power to protect and restore their home Earth.   LAEO’s approach involves the formation of collaborative science and technology teams addressing specific environmental challenges while also focusing on educating members in industry and public sectors. Cooperative Ecology is Anthony’s coined term, a relatively new field described as a “life assisting life approach” and ultimate solution for long-term preservation of our natural resources. 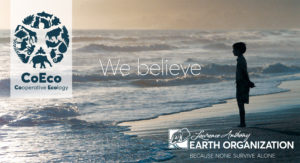 A typical scenario for environmental groups these days is the conflict one sees with industry over the expansion of pipelines, oil and gas drilling and their potential chemical releases. What isn’t routine are environmental groups that seek to bring clashing interests in industry, government agencies and communities into constructive decision making and collaboration. Lawrence Anthony is known for doing the impossible in conflict zones. One example is when he negotiated with one of the most dangerous militant groups in Africa, the Lords Resistance Army in the northern region of the Democratic Republic of Congo in order to save an endangered species of White Rhino. To do that, he had to get agreement from the rebels for terms that motivated them to sign an historic cease-fire that, for the first time in history, included protecting endangered species in the region. The full story is told in his bestselling book: The Last Rhinos published by Macmillan Publishers, Ltd.

LAEO considers that Cooperative Ecology is critical to finding real solutions to impasse situations and that this is what it will take to ensure effective protection and preservation of the health of people, wildlife, commerce, jobs, the economy, and our rivers, oceans, air and lands. Such an impasse recently depicted in North Dakota over pipeline construction plans is a stark reminder of the difficult issues all parties face in such dilemmas.

“Don’t get us wrong; protest is necessary to bring injustices and important issues to public notice. But what to do after that, and how to devise a solution that is a win-win for all, in alignment with natural laws, is the Cooperative Ecology system we teach and implement for protecting and preserving our planet. When push comes to shove, everyone wants not only a strong economy but we all want that without environmental trade-offs. We know that industry wants that, toot,” said Barbara Wiseman, LAEO’s International 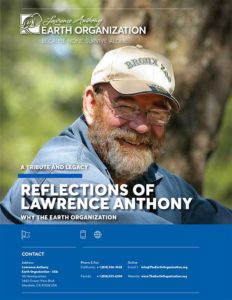 Along with the grand opening of their new website and film short debut, the group released a stirring publication, Reflections of Lawrence Anthony – Why the Earth Organization. Made available free to anyone for educational purposes, the booklet conveys a clear and somewhat chilling picture of the true state of our plant and animal kingdoms and humanity’s responsibility for taking care of their priceless assets.
The iconic story Anthony tells about his saving of the Baghdad Zoo during the invasion of Iraq in 2003 in the book entitled: Babylon’s Ark was one of the experiences catalyzing the formation of the Earth Organization which has now grown to a global presence with 21 Chapters since it began 13 years ago.

The tribute publication can be downloaded from this website at: https://theearthorganization.org/reflections/