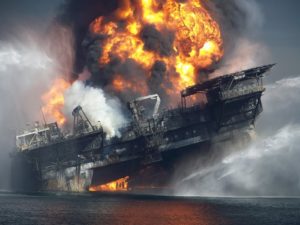 (Tom McGuire having lived and worked in Alaska since 1976 is deeply committed to protecting Alaska’s pristine wilderness and coastlines. Tom spent thirty-eight of those years in the oil well drilling business with extensive field experience on drilling rigs including the last ten of those years as a directional driller for Halliburton Energy Services and then Schlumberger Technical Corporation. This article was submitted as part of a letter to U.S. government agency and congressional officials in July 2017. As a respected friend and advisor to the Lawrence Anthony Earth Organization, we have published his submission here.)

Imagine turning on your TV and seeing something similar to what we saw when the Exxon Valdez struck Bligh Reef in 1989 spilling Eleven Million Gallons of oil into Prince William Sound, one of the most pristine environments on Earth! You may know the rest of that story, which could prove trivial compared to a potential disaster in our future, like the Deep Water Horizon in the Gulf of Mexico.

Imagine an oil Rig in Alaskan waters blowing out and spilling 201,000,000 gallons (5 Million barrels) of oil. As the Rig disintegrated and sank, we received the news that there were eleven employees killed.

Imagine every day, as the news broke out, being informed that the Oil Company was doing its best to contain and mitigate the spill. They were flying airplanes overhead and had sprayed and dumped at least 2,000,000 gallons (48,000 Barrels) of a dispersant called Corexit 9500 and Corexit 9527 onto the water. A percentage of the spill was contained, burning off and sending a dark, thick cloud over the city of Kenai and north to Anchorage and into the Matanuska Valley.

Imagine people on the Kenai Peninsula and throughout Alaska protesting in front of the Oil Company’s building. They were claiming that the dispersants the Company was using contained 57 different kinds of chemicals. One resident revealed the MSDS (Material Safety Data Sheets) for Corexit 9500 and Corexit 9527 that stated clearly:

“DO NOT CONTAMINATE SURFACE WATERS WITH THIS PRODUCT.”

Imagine a group of engineers calculating the combination of Hydrocarbons and Corexit 9500 to be increasing the toxicity of the spill by a factor of 10x or greater! Imagine Regulators calling for more studies, stating that “effects are still uncertain and a better understanding is still needed.”

Imagine the confusion and anger from the Native and Fishing Communities that would persist if the Environmental Protection Agency, Coast Guard, and NOAA stated that “25 percent dispersed and burned off of the spill would be good enough, and that nature would take care of the rest.”

Imagine the Governor putting a hold on all Commercial and Sports fishing in Southeast Alaska until further study could be completed on just how toxic the spill could be. Imagine the Environmental Protection Agency stating, “This investigation could take years to finish.”

Imagine the Medical Communities in Alaska being swamped with residents and cleanup workers who were plagued with breathing problems, coughing, headaches, memory loss, fatigue, rashes, gastrointestinal problems and cancer.

Imagine discovering that the Oil Company tried to use a Non-toxic bioremediation process that could have completely mitigated the spill for a fraction of the cost that was incurred, but were stopped and directed to use a toxic dispersant because of the bureaucratic barriers that have been unchanged since the Exxon Valdez struck Bligh Reef in 1989!

Twenty eight years have passed with no change? Would your heart be breaking?

Imagine changing the course of history, working together; conservative and liberal thinkers, for the mutual benefit of the Alaskan environment, native residents, and business development.

Imagine supporting Alaska’s drilling industry, enabling them to save millions, if not billions for cleanup costs, if it was necessary? Imagine being able to completely mitigate an oil spill (100%) without the use of toxic dispersants!

Imagine if we could remove the bureaucratic barriers that are preventing the official cleanup crews from using bioremediation techniques.

Could our Alaskan Regional Response Team take a stand and change history?

Imagine the National Response Team making the right decision, for all Alaskans, to discontinue pre-authorization for the use of dispersants in Alaskan waters and then implementing bioremediation techniques that would prevent any future disasters from destroying our pristine environment.

Finally, the attached document entitled Oil Spill Comparative Analysis provides the details for cost savings through effective oil spill response and could be the means for all concerned to implement the changes for Alaska’s environment and safe development.