Eco-Safari Update: Getting There

I thought you would enjoy hearing from me while I’m here in South Africa, hosting a Safari or two! I’ve just arrived and wanted to put down some impressions from the very loooong flight over and some of the wonderful things I’ve already observed.

Our flight took us from L.A. to Washington D.C. and then to Dakur with a little stop and then on to Johannesburg, South Africa. From the Washington leg of the trip to Dakur you could tell we were going to a part of the world that wasn’t in the US. Many of the people on the flight were from Dakur and they are a very beautiful people. Many of the women have intricately braided hair that framed their stunning faces. Some of the ladies wore head pieces and dressed in native dresses that were striking and so colorful! 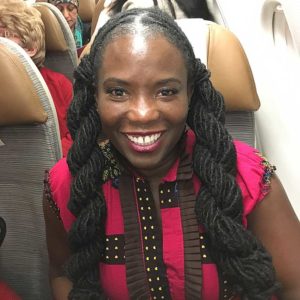 The flight was a bit crowded, and of course we flew Coach, or as George calls it, “Steerage,” but having my kindle and taking the NO JET LAG really did seem to help. At Dakur we had an hour wait and we had to stay on the plane. Sitting in back of us was one of the star rappers of the group, Arrested Development. Apparently, they had the name long before the TV show – (he said they sued and settled with the TV company). They were performing in Jo’burg, as they have several times, and they actually tour the world, and have for years… here’s a picture of one of their managers – she was awesome and had some amazing braids! Just lovely people, and George got a chance to do his comedy routine on them and they loved it!

From Jo’burg we are going to our 1st destination, Durban….

More about Day one in Durban in my next installment.