This was a report out of Russia–but really, this is going on all over the world.

An important reminder in an amongst all the Earth Day and beyond messages:

Being aware of environmental issues isn’t enough. We believe that any expression of a problem must be accompanied with a solution.

Here is a report of a problem recently covered by a news outlet: “Arctic Deeply”: 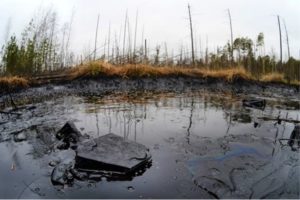 “… by the Russian government’s own reckoning, some 1,360,777 metric tons (1.5 million tons) of oil is spilled annually. That’s about 10 million barrels, or twice the amount oil spilled during the 2010 BP Deepwater Horizon disaster in the Gulf of Mexico. It’s also about 30 times the amount of spilled oil actually reported by Russia’s oil companies, according to a report prepared by Chuprov.”

Quite some astounding numbers wouldn’t you say!

Academia/Science, industry, government agencies and advocacy organizations all have a responsibility to bring optimum solutions to the table.  The Lawrence Anthony Earth Organization’s Cooperative Ecology approach is that new paradigm.

Here’s one solution we have just brought to the table:

For the past few months we have been hard at work on a research project that will not only help the environment, but also insurers, industry members, government regulators and other stakeholders who want to improve the world’s ability to clean up oil and chemical spills in our oceans and fresh water environments. The work has culminated in the completion of our Oil Spill Clean Up Methods – A Comparative Cost Analysis. Many of you have been following our Change Oil Spill Response Campaign, now in its 7th year. But for those not familiar with this issue, I will first share some background information.

ant? We can’t. Or, how can we justify higher costs using less effective technology? We can’t. To put it another way, how do we justify keeping a Model-T oil spill clean up system in place when a Lamborghini or Ferrari system is readily available? We can’t. Yet, the Model-T has been the norm in addressing oil spills for nearly 4 decades. Government agencies and industry have been locked into using ineffective oil spill clean up methods and harmful agents such as chemical dispersants for too long now. The full story and documentation with solutions can be found in the research paper: A Call for a Twenty-First Century Solution in Oil Spill Response on our website at the Environmental Solutions Hub tab.

Chart to your right: What’s it cost to truly clean up one gallon of an oil spill with an eco friendly bioremediation method, OSE II?  A lot less than the Model T methods!  Like 77% less with 100% results.

Make every day your Earth Day