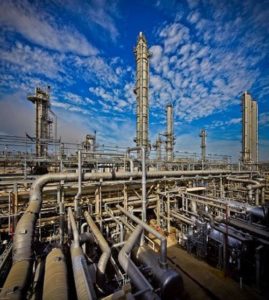 Imagine living next to a chemical plant.

I remember when I was a child living in San Pedro, California when we used to drive by a huge refinery and chemical plant nearby. It was a landmark in my neighborhood. One of the round balloon-like storage tanks was painted bright orange with a pumpkin face on it which I was always happy to see – somehow that happy face made me have a great affinity for this monster maze of pipes, tanks and spewing smokestacks with fire flares roaring into the sky. 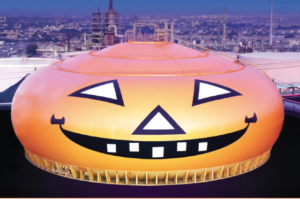 All this represented a miracle-ability of the human species to convert black crude and other matter residing deep beneath our Earth’s surface, into high demand energy resources.

Now, again, imagine living next to a chemical plant that deals with highly toxic chemicals which invisibly seep out into your nearby vicinity. And, you don’t know it. Like the lead levels now exceeding safety thresholds in drinking water in many cities across the country, invisible chemicals seem to have made their way into everything! The miracle-ability of the human species can also be applied to environmental restoration solutions that yield even better profits and benefits for all stakeholders. This story and action should be encouraged and rewarded to industry members applying Cooperative Ecology principles.

Here’s a bit of GOOD NEWS in this sector!!! One inventor and scientist that LAEO does projects with discovered how Mother Nature devised a means for protecting and preserving our oceans and waters, enabling living microbes to render seeping toxic chemicals and rearranged molecules to virtually harmless–unable to overwhelm its waters, soil, plant and animal life. This was in 1989, and much of this breakthrough has been suppressed as a disruptive technology by chemical companies.

The Lawrence Anthony Earth Organization (LAEO) has assessed and advocated for more effective oil/chemical spill clean up technologies since the 2010 massive oil well blowout in the Gulf of Mexico. After an effective 7-year campaign, in partnership with innovative companies, regulators and like-minded groups, we now see major industry members adopting Enzymatic Bioremediation clean-up technology as a preferred methodology—now being used on oil rigs, at chemical refineries such as a massive plant in Texas and by pipeline, oil and gas companies throughout the world on oil and other chemical spills.  LAEO would like to publicly acknowledge those industry members for adopting this technology.  This action enables the removal of 100% of any chemical pollutant spill that may occur, eliminating seepage into ground water, saving workers and the environment from harm.

Unfortunately, because of the controversial nature of spills, we are not able to publicize the companies that are doing what’s right by implementing this technology until they give permission. It’s a crazy world when those doing good have to hide the fact so they don’t get sued or otherwise attacked–especially because it doesn’t conform with the mainstream methods of using chemical pollutants to clean up (hide) other chemical pollutants–like a drug that does harm but  is rationalized as having acceptable trade-offs to defend the chemical/drug company’s position and the billions being made in that marketplace.

Congratulations also goes to OSEI Corporation and their CEO and Scientist Steven Pedigo (formulator of Enzymatic Bioremediation) for persisting in gaining ground for this technology that is helping protect and preserve our world.

And by the way, I just could not resist sharing this — a memory about chemicals that was triggered while I was writing this. If you are a U.S. born baby boomer, you will get a kick out of this! When I was a child my favorite place, Disneyland, featured Monsanto, teaching me and other children about the amazing world of the elements and molecules—driving one through an atom-size world and giving one the idea that all science is good and produces valuable stuff! And, what was Monsanto’s stated mission to millions of visitors? “To rearrange molecules for the benefit of mankind”  (Unfortunately, their rearrangement of molecules became Genetically Modified Crops, Herbicides and Pesticides that have nearly destroyed the nutrients in our soils and knocked Earth’s ecosystems out of balance!)

If you were born in the 50s or 60s you will enjoy this trip through Monsanto: