When our teen Ocean Adventures takes us to the Mediterranean Sea, we like to visit Corfu (Greek name, Kerkyra), an island near the west coast of Albania and Greece. 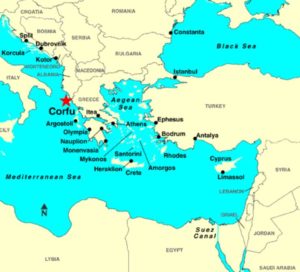 The second largest of the Ionian Islands, 40 miles long and 20 miles at its widest width, Corfu is about 229 square miles (about four times the size of San Francisco).  In the summer months, temperatures are a pleasant 80 degrees Fahrenheit and, due to heavy rains in the non-summer months, it is the greenest of the Greek islands.  And best of all, other than certain coastal areas, much of the island is relatively untouched by the tourist trade. 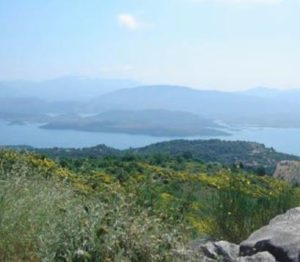 The inner areas are reached by winding, sometimes relatively primitive roads, or via the Corfu Trail (thecorfutrail.com), the entirety of which takes eight to 10 days to hike some 136 miles along its trails on the island, giving one an opportunity to experience a wide variety of Corfu ecosystems, from the sea and its waterfowl, to the highest peaks on the island.

Naturally, when we travel to Corfu, we are always checking out the environmental scene, mindful of any problems, and keeping in mind solutions using our CoEco™ philosophy. 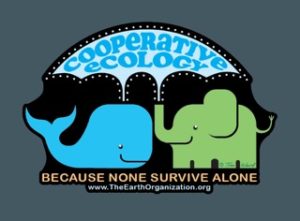 In west Corfu is Paleokastritsa Beach, which has both sandy beaches and pebbly-beaches, as well as caves with stalagmites and stalactites just begging to be explored. Here are also great diving and snorkeling and a small aquarium, all excellent ways to learn about the local ocean environment, plus rentable paddleboats to see from topside where the waters are so clear you can see the bottom.  Nearby is the Paleokastritsa Monastery, first established in the 1228 A.D., with a small museum, reached through a forest of olive and cypress tree, atop a remote hill with spectacular views.  Those seeking adventure off the beaten path can check out the village of Lakones via several paths from the town of Paleokastritsa, and from there find the cobbled path to the top of Mount Arakli (elevation 1,657 feet) and then to Makrades and Krini and to the foot of the mountain to discover the ruins of a fortress 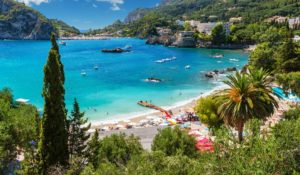 From Corfu’s highest peak, Mount Pantokrator (almost 3000 feet elevation) in north-eastern Corfu, one can enjoy an expansive view of the entire island, as well as across the sea to Albania and sometimes even Italy.  The road to the top is so dramatic that it was chosen for the car chase in the 1981 James Bond movie, For Your Eyes Only.  Perhaps more interesting is that over the crest of Mount Pantokrator is the most intense cluster of sinkholes in Europe…six square miles of ancient carbonate formations and dolomitic limestone, from a geological uplifting that formed the mountain 18-12 million years ago.

Above the village of Pelekas (near the west coast) one can climb old stone steps to the famed lookout point referred to as “Kaiser’s Throne,” where Kaiser Wilhelm II liked to sit and watch the sunsets, driving there about nine miles from where he summered near Corfu Town on the east coast. But any time of the day one can enjoy a stunning 360-degree view of the entire island as well as across the sea  to Albania and the Greek mainland. 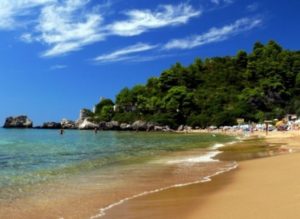 Ten miles north of Corfu Town is Glyfada Beach, considered by many to be the best beach in Corfu, with its striking white sand and rock formations.

But when we travel to Corfu, we don’t just visit the places the tourists love.  We have done a clean-up of a beach that nobody visits, just to make the world a better place. And we find places to dive where it’s very likely nobody has ever dived before, to report on the condition of the coral there to international scientists so that they can better understand what is happening with the international climate and environmental changes.

Once we discovered a spot at the Temple of the Goddess that is forbidden for citizens to visit, and ate kokoretsi and horiatiki along the way. (Look those up…that’s a  gastronomical adventure!)

However, Corfu has a long and varied history, back to mythological times.  Some identify it with the island of the Phaeacians described in the Odyssey, the ancient classic Greek poem written by Homer.  Throughout the island, and particularly in the town of Old Corfu, there are many historical places to explore. 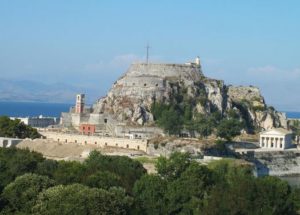 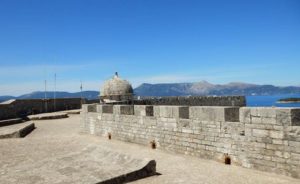 It’s neat to check out Old Corfu’s two ancient forts.  The Old Fortress dates back to the 6th century BC and was built up over the centuries against invasions from the sea. Famous for withstanding sieges in 1537 AD, 1571 AD and 1716 AD, the Old Fortress now houses the Public library of Corfu.  The “New Fortress,” built between 1576 AD and 1645 AD and considered an architectural miracle at the time, is smaller, with tunnels running to the old fort and old Corfu Town, and is well known for its impressive views of the Corfu port and across the sea.

In the center of Old town Corfu on the central east coast stands the 15th-century Greek orthodox church with the tomb of St. Spyridon, the island’s patron saint, with ornate paintings and sculptures.

Also in Old Town Corfu, one can visit Casa Parlante, a 19th century classic mansion where the life of nobility of the time is recreated through animated figures.  One can “listen to the children of the family playing music, smell the aromas of the cook’s virtuosic cuisine, and read the headlines of the Count’s newspaper.” At the Archaeological Museum of Corfu one can view archaeological finds from the Temple of Artemis at Corfu, which was dedicated to the ancient Greek goddess of the hunt, childbirth and wild animals.

For souvenir shopping, there are plenty of shops along the narrow, winding streets of Old Corfu where one can find unusual things such as crafts and wood carvings.  One neat shop is Fos Anatolis which offers everything from Afghan jewelry to Turkish rugs and Indian pashmina shawls, along with Greek dolls and glass lanterns.  A popular tourist destination is Liston Street, a picturesque Venetian Old Town, with numerous coffee shops with ice creams and pastries, breakfasts and light lunches, and Greek delicacies. 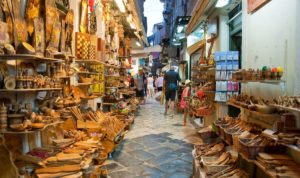 We might mention the Museum of Asian Art in Corfu, which is unique in Greece and one of the most important museums of its kind in Europe, showcasing the vast collections of Grigorios Manos, who served as Greek ambassador to France and Austria, N. Chatzivasileiou, former Greek ambassador to India and Japan, and Ch. Chiotakis, a Greek merchant who lived in Holland for many years.  There are Japanese prints and Chinese porcelain, wood-carvings, weapons, sculpture, metal artifacts and more, including some from India, Thailand and Pakistan. The Museum is located in the Palace of St. Michael and St. George which was built in the early 1800s, itself a fine example of neoclassical architecture. 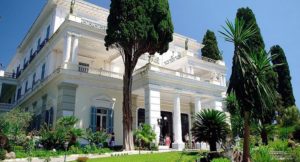 Also, the Achilleion Museum in nearby Gastouri, built in 1890 by Empress Elisabeth of Bavaria as her summer palace in the style of an ancient Phaeacian palace decorated with statues of ancient philosophers, heroes and mythical ancient gods, features the mythical Greek hero Archilles.  Kaiser Wilhelm II, the German Emperor (Kaiser) and King of Prussia from 1888-1918, bought the palace in 1907 as his summer residence, and the palace has also served  as a military hospital, orphanage and casino—in fact the casino scene in the same James Bond movie, For Your Eyes Only, was filmed there.

You can see some of these sights in our little video:  Click here.

So there’s lots of history discoverable on this little island of Corfu.  As another example, in the town of Kassiopi at the northeast tip of the island, one can walk in the same places as Cicero, an early Greek politician, lawyer, philosopher and orator (106-43 BC), and the infamous Emperor Nero (37-68 A.D). 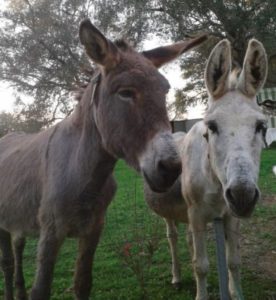 For a change of pace, a lesser-known area that’s fun to visit is the Corfu Donkey Rescue, a volunteer-run animal sanctuary that has rescued over 500 donkeys over the past 13 years as well as horses, dogs and cats.  Visitors can brush and pet the donkeys—and you can even bring apples and carrots that they will grind up so you can feed the animals!

And, lastly, if the uniqueness of this beautiful Greek island and its history becomes too much for our teens, there is always Aqualand, one of the best waterparks in Europe, to make our teens feel more at home!