Climate Change and the Dividing Line Between Smart and Stupid

Lots of strange planetary stuff is going on, some call it “Climate Change,” some say the cause is fossil fuel use, but others say, this is just another planetary climate cycle like the ice age and other periods over the millions of years of history on this planet.

“Salmon are crucial to their coastal ecosystem like perhaps few other species on the planet. A significant portion of the nitrogen in West Coast forests has been traced back to salmon, which can travel hundreds of miles upstream to lay their eggs. The largest trees on Earth simply wouldn’t exist without salmon.” …

“Attendant with this weird wildlife behavior is a stunning drop in the number of plankton — the basis of the ocean’s food chain. [and the air we breathe!] In July, another major study concluded that acidifying oceans are likely to have a “quite traumatic” impact on plankton diversity, with some species dying out while others flourish….”

One common denominator to dying oceans that The Lawrence Anthony Earth Organization USA has identified and is addressing is the presence and cumulative effects of chemical pollutants released in our waters and atmosphere.

We are working to bring forth technologies that can be utilized to clean up and remove such pollutants from our environment. The technology exists, but for whatever reason, is being suppressed! It is amazing just how weird the behavior of environmental protection agency officials can manifest when we engage in discussions on this subject. The Gulf of Mexico 2010 oil spill is an example utter stupidity in science–EPA science endorsing toxic chemicals for oil spill clean up! 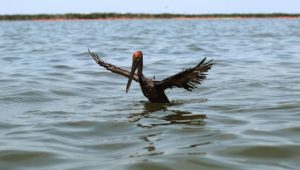 Another Example: The U.S. Environmental Protection Agency doesn’t permit a gentle non-toxic solution to be used to clean oiled birds. That means, most birds that come in contact with an oil spill will die.

It seems as though U.S. agencies don’t have time or dollars to invest in science for better solutions. Not a good excuse when a 13 year old science student, Alana Tessman, was able to find an answer for helping oiled birds!